Excerpts from a Beth David publication from the early 1960s:

The beginnings of a Jewish community in Binghamton were evident as far back as 1862 with the arrival of a small group of Jewish immigrants from Germany, who formed the Hebrew Benevolent Society. In 1885, the East European immigrant Jews organized the first formal congregation known as Sons of Israel. Beth David Synagogue dates back  over a century when a small group of Jews felt there was a need for another synagogue to serve the growing population of the Binghamton Jewish community. In the years of 1904 and 1905 this small group would gather informally to form a “Minyan” for religious services. Though, in July of 1905, the Minyan was formally incorporated as the Hebrew Brothers Association, the less formal name “Minyan” was the term used in referring to the new congregation. Among the founders of the Minyan, whose names appear on the original charter, where Jacob Shulman, Max Shapiro, Benjamin Levine, Morris Citlin, Abraham Feinbloom, Israel Klionsky, Isaac Silverstein, Shloima Melamed.

Most of the early members were peddlers who covered a wide radius in all directions from Binghamton, carrying in their packs everything from dry goods to eyeglasses. These men would spend all week out of the city peddling, and on Friday, by two’s and three’s, they would trickle back to Binghamton to settle accounts and bathe and dress for Shabbos. Meeting in a rented house at 145 Susquehanna Street, this small congregation reflected the struggles of the early immigrant. There is no doubt that the synagogue business meetings in those days served as the main source of entertainment for many of the members. The old-timers from our congregation still remember with a smile the ‘lively’ meetings.

By December 1915, the Hebrew Brothers Association was affluent enough to purchase the house on Susquehanna Street from Mr. Samuel Pierson, and the original mortgage was held by Mr. Abraham Pierson. For many years the congregation went without the services of a religious functionary, engaging various Chazonim for the High Holydays alone.

The size of the holiday congregation grew so that it could not be accommodated in the single room at Susquehanna Street, and various halls were rented for these occasions. By 1929, the congregation had far outgrown the meager quarters on Susquehanna Street. A Building Committee composed of William Lieber, Isadore Melamed, Jacob Weissman, Joseph Bittman, and Ben Sall arranged for the purchase of a four family house at 53 Carroll Street. The synagogue on Carroll Street pictured below was completed after many struggles in 1930. In July of 1931, the name of the Association was formally changed to United Hebrew Brothers Congregation. Despite this attempt at a new measure of formality, the synagogue on Carroll Street was always known as “the little Shul.” In September of 1931, the first affiliate of the congregation came into being, the Ladies’ Auxiliary. 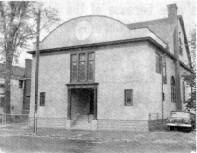 In May of 1956, a new chapter in our synagogue’s history was begun. Demonstrating a new effort to revitalize the congregation and to rebuild Orthodox Judaism in the community, the congregation decided to change its name to Beth David Synagogue. With the change of name, a new spirit and a new zeal became evident. At a rapid pace, many innovations were effected. A Hebrew school was organized, Sunday School classes met in the synagogue building, the Ladies’ Auxiliary became the Sisterhood, and more decorous and dignified services were conducted. The status of Beth David Synagogue and of orthodoxy grew measurably over a brief period.

By 1960 it became evident that a new building, with facilities for the varied functions and activities of a modern synagogue and located within the heart of the Jewish population, was a prime necessity. At a special meeting held on August 14, 1960, the congregation firmly recognized the need for new facilities, and by a unanimous vote, authorized immediate steps be taken to initiate a building program. A Building Committee under the chairmanship of Mr. Henry M. Perl was formed, and in January of 1961, a very successful building fund campaign was conducted. The lot at the corner of Riverside Drive and Murray Street was purchased in March of 1961, and the services of our architect, Mr. Werner Seligmann, were engaged.

Groundbreaking ceremonies took place on December 16, 1962, with a spirit of excitement and thanksgiving very evident among the large gathering of members and friends of the congregation. Mayor John J. Burns addressed the congregation, expressing his admiration for the enthusiastic and dedicated spirit that had made the ceremony possible. Though the ground was hard and covered with snow, warmth and joy filled our hearts when the frozen earth was turned, and we knew, at long last, that the dream was becoming a reality. Our pride in our achievement grew as the building took form and shape. Our pride doubled when the design for the new Beth David Synagogue was awarded a citation by Progressive Architect magazine, and a model displayed in the Jewish museum in New York City (see artist’s conception above).

On February 9, 1964, the formal transfer of Torahs to the new building on Riverside Drive took place, and consecration services were conducted in an atmosphere of reverence and thanksgiving that profoundly moved all who were in attendance. 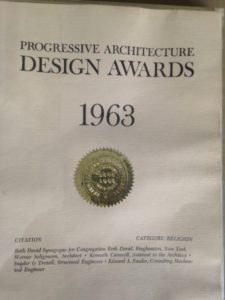 More details about the building are available on Sam Gruber’s blog.

We call ourselves "the friendly little shul on the West Side" and we try as best we can to live up to this title that was given to us years ago.

Please join us for services during the week, on Shabbat and on holidays.

We are a conveniently located stopover between Brooklyn, resp. Monsey and Toronto. Visitors and students are always welcome!